State Bureau of Investigation Agents Roy Contreras and Josh Workman received special recognition at the US District courthouse in downtown Salt Lake City. The pair were presented with the United States Attorney’s Award for their efforts in disrupting drug operations as a part of the Operation Rio Grande Drug Task Force.

Colonel Brian Redd, who oversees SBI Operations as Deputy Commissioner of the Utah Department of Public Safety says the award is well deserved, “Agent Contreras and Agent Workman are extremely dedicated to their profession. They work collaboratively to follow, investigate, and disrupt drug trafficking and serious criminal activity. They are respected by their peers and represent the Department of Public Safety in an exemplary manner.”

While the efforts of the ORG Drug Task Force are crucial to the overall success of Operation Rio Grande, Col. Redd notes that the impact of their work is also being felt far from the troubled downtown area, “They have been working tirelessly since the start of the operation to remove drug dealers and dangerous criminals from our streets. While the main objective of the task force is to disrupt drug distribution and criminal activity in the Rio Grande District, they also follow those same networks if there is movement to other locations. Working closely with our local and federal law enforcement partners, they have investigated cases across the Wasatch Front.”

The award is the highest honor bestowed by the US Attorney’s Office. 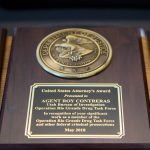 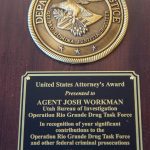 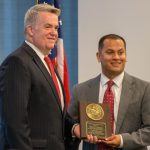