UPDATE: This version fixes a couple of errors in jurisdictions from the version that was emailed to the news media. Also, we have added Pleasant Grove, Layton and Uintah City as agencies that are deploying to California for a new total of 32 engines. Also, see the video of the group deploying below or here on YouTube. 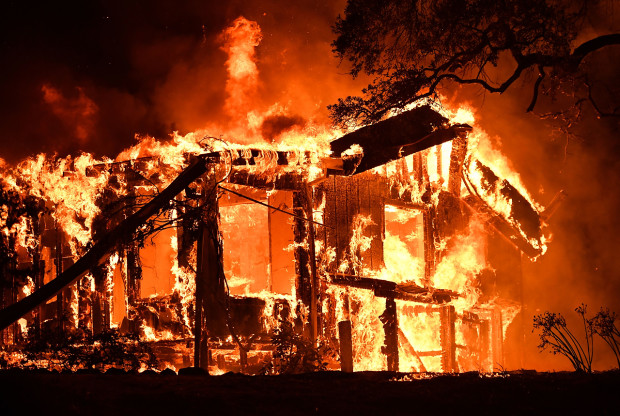 Flames ravage a home in the Napa wine region in California on October 9, 2017, as multiple wind-driven fires continue to whip through the region. (credit JOSH EDELSON/AFP/Getty Images)

SALT LAKE CITY — Nine Utah fire agencies are sending firefighting resources to California to help with firefighting in some of the deadliest fires in California’s history. Eight of those engine crews are deploying under the Emergency Management Assistance Compact (EMAC), a system of state-to-state mutual aid.

This will bring the total to 32 engines and at least 130 personnel from Utah heading to assist.

They are planning to rally at the Maverik Center in West Valley City at 8 a.m. on Saturday, Oct. 14, with a departure at 9 a.m.

They will be put to work immediately and they plan to be used for 21 days.

The Utah Division of Forestry, Fire and State Lands has already deployed ten engines and crews through ROSS (Resource Ordering and Status System), coordinated by the National Wildfire Coordinating Group.

California is seeking any resources they can to help relieve the burden on local firefighters who are exhausted from continuous operations. The current fire outbreak in California has been one of the deadliest and most destructive in the Golden State’s history.

Earlier this week, Utah Gov. Gary Herbert voiced his support for sending resources from to California. Utah stands ready, willing and able to help a state in need.

The Utah Division of Emergency Management is the State of Utah’s lead agency for EMAC requests from other states. Currently, Utah has two state employees who are deployed to Florida in response to Hurricane Irma.