Oscar will turn 5 years old on June 13th and he has a lot to show for himself over the last 5 years.  Oscar grew up behind prison walls in Ohio and was raised by a federal inmate before making his debut in Utah, where he now serves as a Alcohol, Tobacco, Firearms & Explosives (ATF) K9 agent alongside the Department of Public Safety’s Deputy Fire Marshall Troy Mills.

Earlier this month Oscar had to do his annual re-certification with ATF, unlike many other service K9’s Oscar is a food reward dog, in order to earn his treat he must find the accelerant.  Oscar is trained by his handler regularly on 19 different chemicals and is trained to recognize several products that have been divided within six different categories of accelerant. When Oscar recognizes an odor, he alerts his handler by pointing to it with his nose and then sitting.

The process for the ATF certification involves several steps and in order to pass he must recognize and alert properly in at least 6 different categories including:

Oscar not only passed his re-certification test but he aced every single test he was put through! Not many arson dogs perform at this high of a level, we are fortunate enough to have Troy and Oscar so tremendously represent the Fire Marshal’s office and the Department of Public Safety.

Oscar is one of 54 ATF certified K9’s in the entire country. Oscar covers anything within the State and last October had the privilege to be called to help on a fire investigation in Bingen, Washington at a fruit warehouse that burnt to the ground, the total loss was estimated at over $50 million dollars. In addition to Oscar, 25 other ATF certified K9’s also were called out to investigate.

Great job Troy & Oscar, keep up the great work and thanks for representing DPS so well! 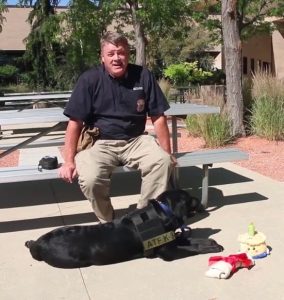 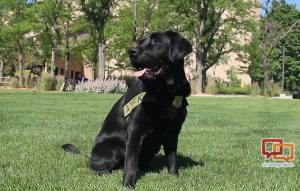