On October 10, 2021, at 6:30pm, a 2007 Honda motorcycle was eastbound on SR-189. As the motorcycle approached the intersection with Squaw Peak Road a 2015 Nissan Sentra, pulled onto SR-189 in front of the motorcycle. The motorcycle struck the Nissan in the driver’s side rear quarterpanal.The motorcycle rider was transported by ground ambulance with […]

At approximately 12:16pm a northbound motorcycle ridden by a single male in his late fifties failed to negotiate a curve at mile 471 on US 89 in Logan Canyon. The motorcycle was laid down in on coming traffic, shortly after the motorcycle was struck by a truck towing a trailer with cattle onboard, the motorcyclist […]

On August 29, 2021 about 7:30 am, a UHP Trooper attempted to stop a black pickup truck on SR-36 traveling northbound for an equipment issue.  The vehicle fled and the Trooper did not pursue the vehicle. The last known location was given and officers searched the area.  The vehicle was occupied by a male driver […] 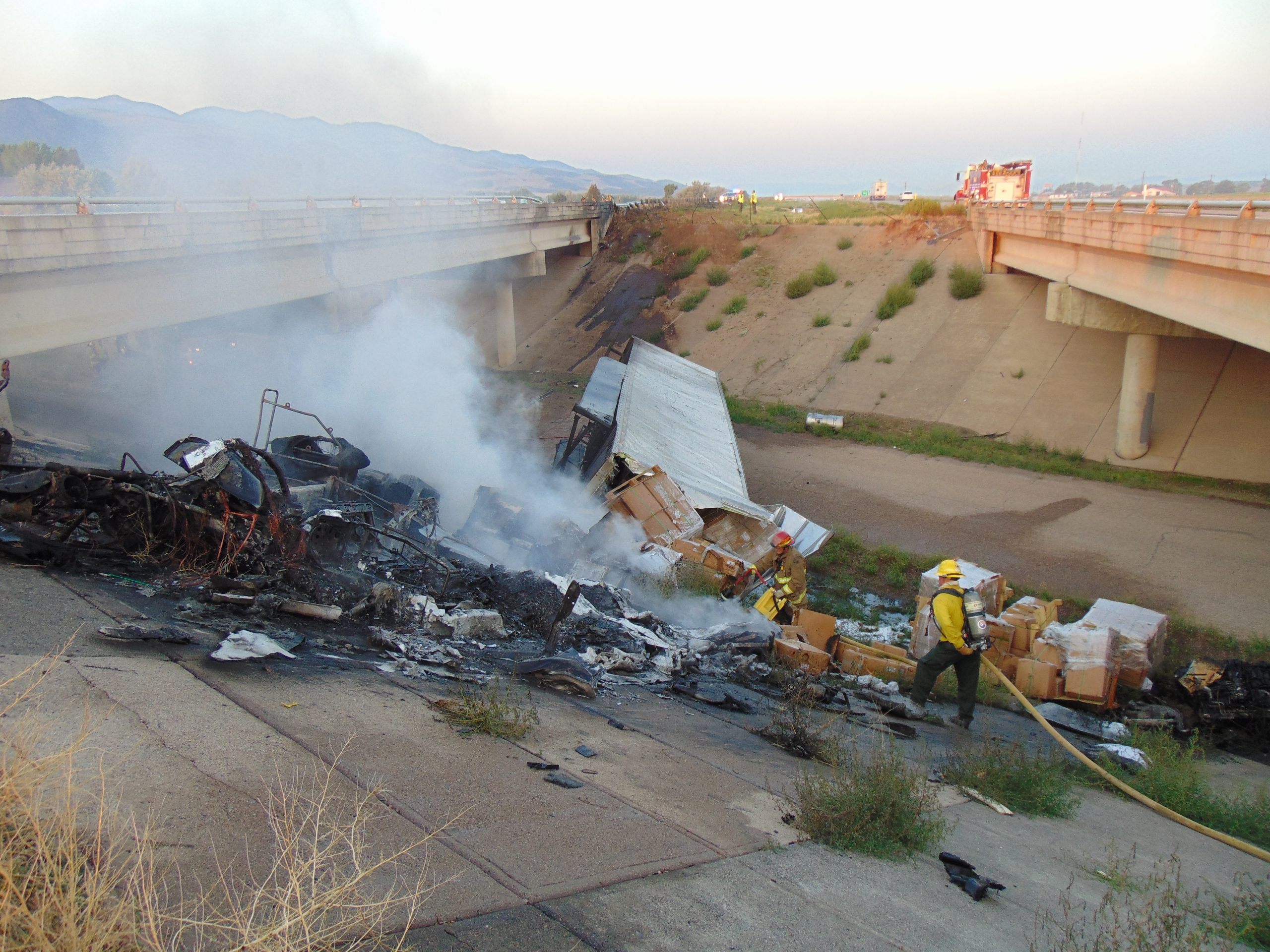 This morning at approximately 6:30 A.M., a semi truck was heading northbound on I-15 at milepost 71. A witness stated the semi veered off the road to the left and struck the barrier. The semi truck launched over the barrier and landed on the road going underneath the freeway. The driver of the semi was […]

On June 25, 2021, at approximately 1519 hours, two motorcyclists, 1 male and 1 female, were traveling southbound on I-15 at 14600 South. The female rider was traveling in front of the male rider and stated she ran over something in the road but didn’t know what it was. The female rider said she looked […]

On June 20, 2021 at approximately 06:20 hours, a pickup traveling eastbound on I-80 near MM 9 lost control and rolled multiple times on the right hand shoulder. Both occupants were ejected from the vehicle. The occupants were males in their twenties. A UHP trooper arrived shortly after the accident occurred and attempted life saving […]

A white 2007 Chevy Malibu was traveling South on SR-89 at MP 149 with one occupant, a male in his mid fifties. The vehicle drifted completely off the right side of the road. The driver appeared to try and regain control after a great distance but his actions caused the vehicle to roll. The driver […]

At approximately 3:10 AM on Sunday May 16, a motorcycle failed to negotiate a turn, westbound, at mile 10 of SR-92. The rider died at the scene. The rider a male in his early twenties was from Utah County, he was not wearing a helmet. The cause of the accident is unknown at this time. […]

Troopers Wrangle Pigs on the Highway

At about 3:00 PM a pickup towing a horse trailer was headed southbound at mile 336 on I-15. The safety latch on the trailer opened and eight pigs fell out onto the freeway. This resulted in the death of two pigs and a minor accident involving a passenger vehicle. This incident caused a snarl in […]

Critical Accident on I-15 South of Kanosh

On Saturday, April 3rd, at 3:55PM a Nissan passenger car, traveling north on I-15 at mile 145, was driving erratically, changing speeds from 30 and then up to 100mph and weaving excessively, nearly striking several other cars. At one point the Nissan began to pass a Ford pickup with a camper in the right lane. […]

Murder Suspect Arrested on I-80 in Tooele Co.

Tooele County UT- Utah Highway Patrol Troopers stopped a vehicle out of California on Thursday February 11, 2021 near mile post 74 on I-80 and arrested the occupants suspected in crimes out of state. Approximately 1:31 PM on February 11, 2021 UHP Troopers had been notified of an Attempt to Locate (ATL) on a vehicle […]

At approximately 5:22 PM on Friday, January 8, a white Honda passenger car was traveling west on 300 North in Beaver, Utah at a high rate of speed. The Honda failed to at stop at the T intersection east of I-15. The Honda blew through the fence, up the hill and onto northbound I-15. A […]

On 9/23/2020 at approximately 7:51PM Kane County dispatch advised of a head on collision on Hwy 89 at milepost 35.5. A westbound Toyota Highlander was traveling behind a slow moving large truck and attempted to pass it in a no passing zone. As the SUV moved into the eastbound lane of travel it […]

Report of Shots Fired on I-215 West California Ave off ramp.

On September 18, 2020 at 2201 hours dispatch advised of a shots fired call at I-215 West and California Avenue off ramp. The caller was a driver of a semi-truck that stated he stopped at the Flying J on 900 West and 2100 South. The driver continued by saying the he was being shot at […]

On 09/18/2020, at 1426 hours, a single unit dump truck was traveling north on SR-224, down a steep grade. The truck left the roadway to the right. It appears that the driver over corrected to the left, and the truck began to roll. When the truck rolled, it lost its entire load of asphalt onto […]

Two passengers die in I-15 crash.

Paragonah, UTAH On May 17, 2020, at 7:25 AM a gray 2003 Honda Odyssey Van occupied by a family of 4 was traveling northbound in the area of milepost 82. The right rear tire of the van experienced a failure and the driver of the van lost control. The van traveled into the median and […]

Huntsville, Morgan County. At 9:55AM on May 17, 2020, a motorcycle being driven by a 77 year old male was traveling north bound on Trappers Loop Road near milepost 8. The driver ran off the right side of the roadway and onto the grass hillside. The driver continued traveling through the grass for approximately 200 […]

I-80 Westbound at milepost 137 closed

At approximately 11:30 A.M on April 26, 2020, a Semi trucking was traveling westbound on I-80 at milepost 137. The semi was hauling double tanks, the second tank somehow became detached and rolled. The Semi and first tank pulled to the shoulder while the second tank remained blocking all three westbound lanes. The tank contains […]

On March 13 around 11:30 p.m. a motorist driving a red passenger car pulled over on the northbound on ramp to I-15 due to a flat tire. Two good samaritans stopped with the vehicle and all three males began to change the tire while one helped direct traffic. Another motorist in a black Volkswagen entered […]

On March 7 about 7:50 pm a white 2015 Chevrolet Impala was traveling south on I-15 near mile post 175, when the driver allowed the car to go off the left shoulder onto the rumble strips, over corrected to the right, left the road to the right and rolled several times. A 39 year old […]

On March 7 about 1:24am a 2006 Toyota Tundra was traveling southbound on I-15 in Orem at the 272 on ramp area. The vehicle left main flow I-15 and entered the area between main flow and the on ramp. The vehicle skidded sideways and then rolled over. There were three occupants in the vehicle. The […]

On February 16, at approximately 10:49 pm, Highway Patrol Dispatch was notified of a wrong way vehicle. A four door silver sedan was traveling eastbound in the westbound lanes. The vehicle was first reported at mile 104 on I-80. A reponding trooper slowed down traffic as he traveled toward the area of the reported wrong […]

Around 6:00am, a tan Ford Ranger was traveling north on I-15 near mile post 143. The road curves gradually to the right, however, the driver continued in a straight line off the left side of the road. The driver over steered back to the right, crossing all travel lanes. Just prior to leaving the road […]

At approximately 10:15 hours a female driver left her lane and struck another vehicle to her right. She then shot left and struck the wall. She was extricated and transported to an area hospital with serious to critical injuries. The cause of the crash is still under investigation.

On July 21, 2019, at about 2049 hours, a small Chevy pickup truck was traveling eastbound on SR-17. The driver of the pickup was a 17-year-old female with a learner’s permit. There were four other passengers in the truck as well. Near milepost 4 (Toquerville) the driver failed to negotiate the swooping turn that leads […]

Date: 07-19-2019 Time: 08:20 Location: SR-6 Mile Post: 84 Travel Direction: West Inv. Agency: UHP Inv. Officer: Jeff Rowell Initial Description: A blue Dodge pickup was traveling north on SR-257, approaching the intersection with SR-6. The driver of the blue pickup did not stop, and did not appear to attempt to slow or stop at […]

There is no excerpt because this is a protected post. 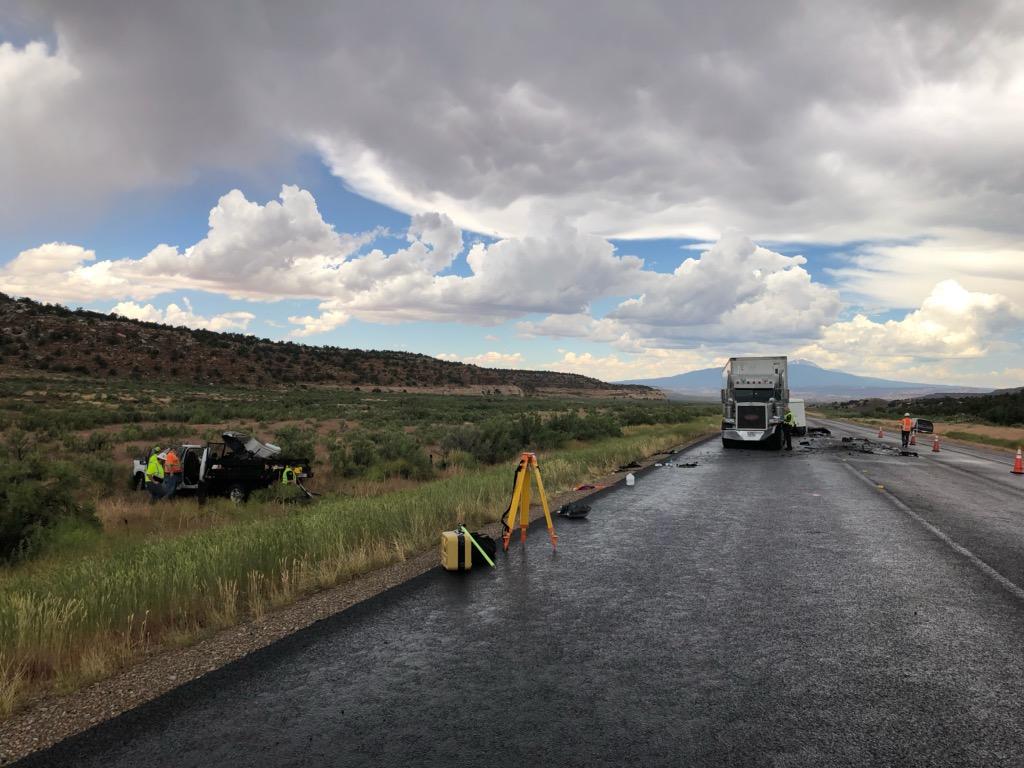 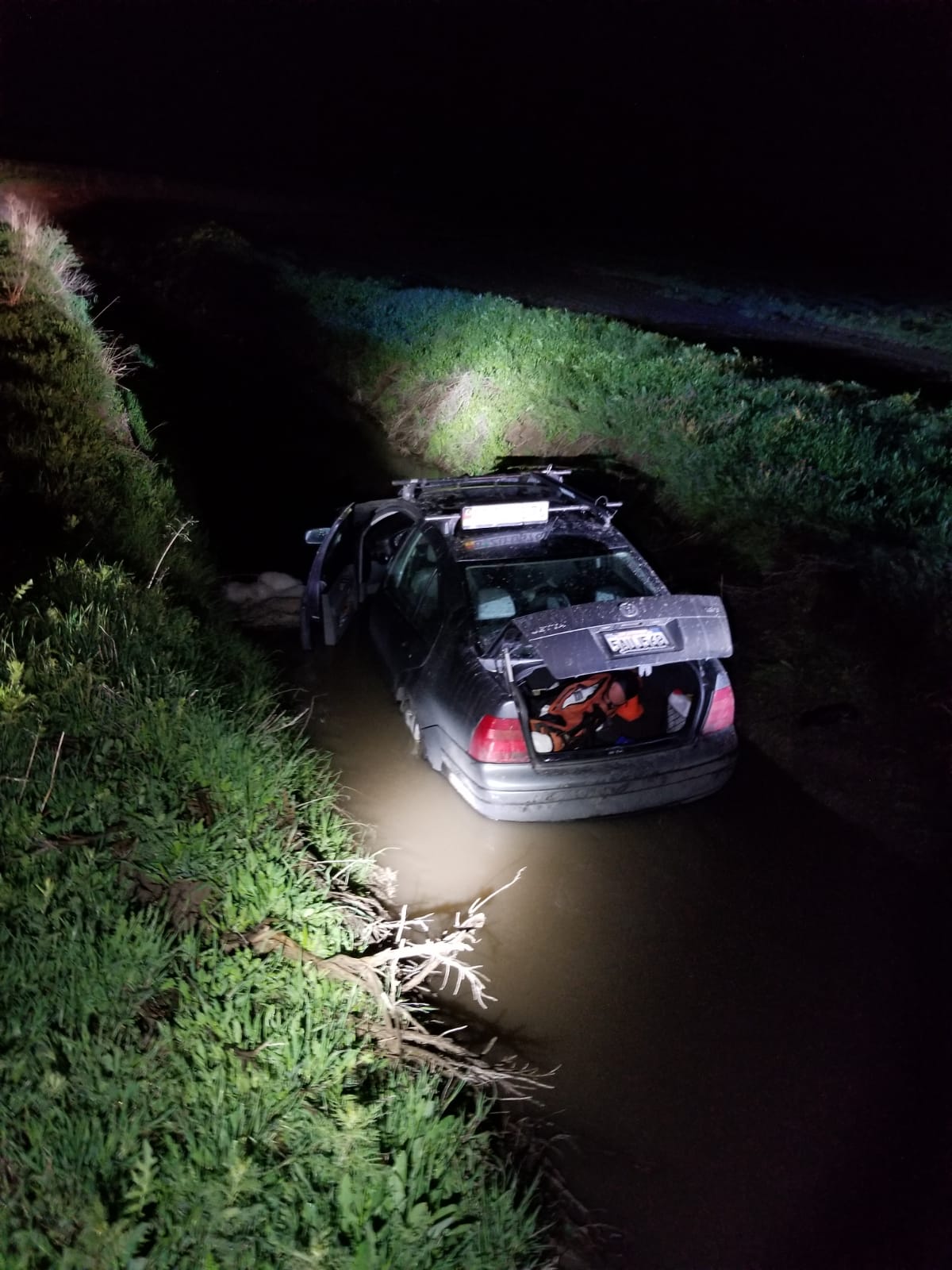 Homicide on I-84 at MM 21 near Snowville

Protected: Video of box truck colliding with a Trooper’s patrol vehicle while the Trooper was conducting a slow-down maneuver.

There is no excerpt because this is a protected post. 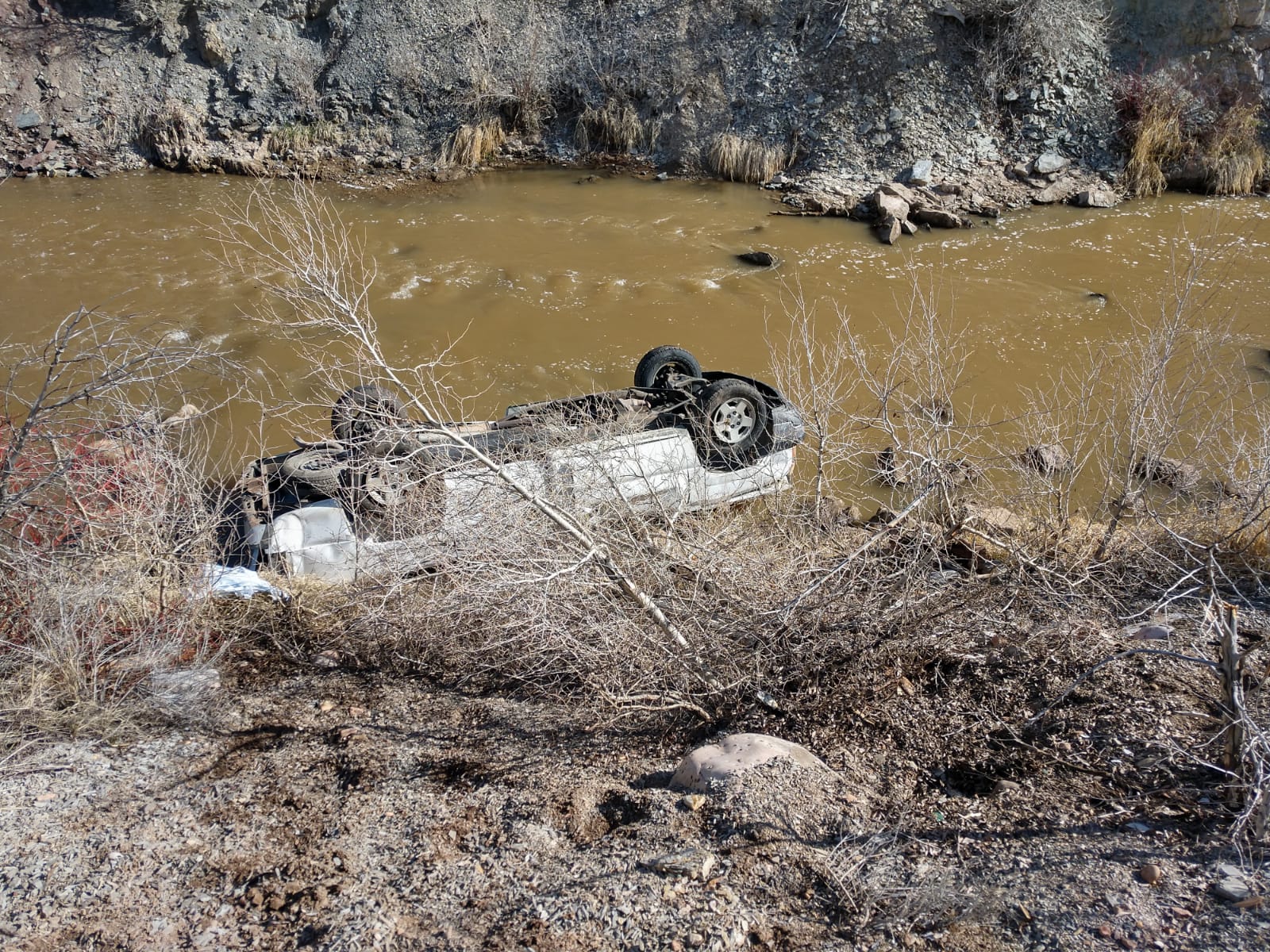 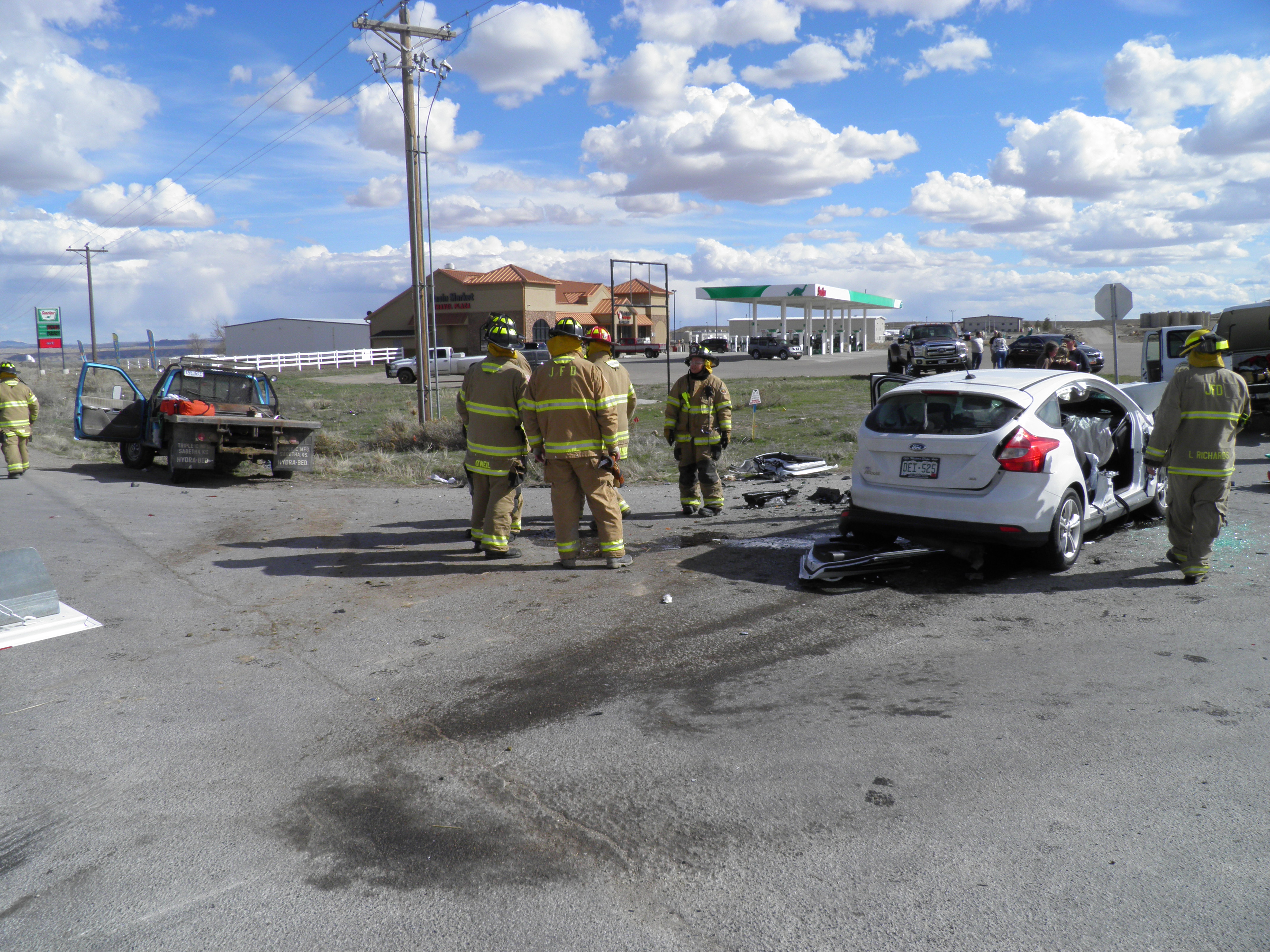 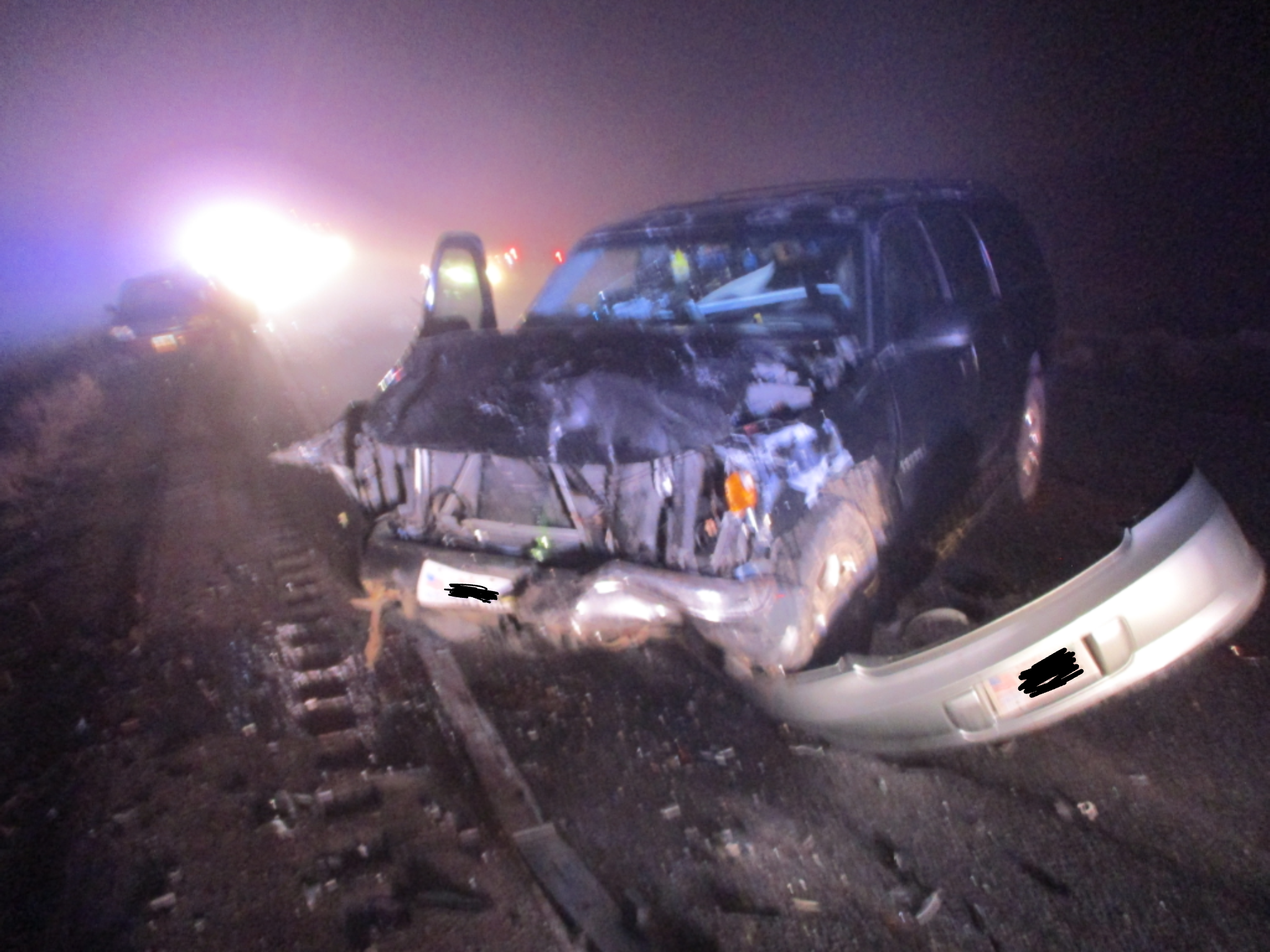 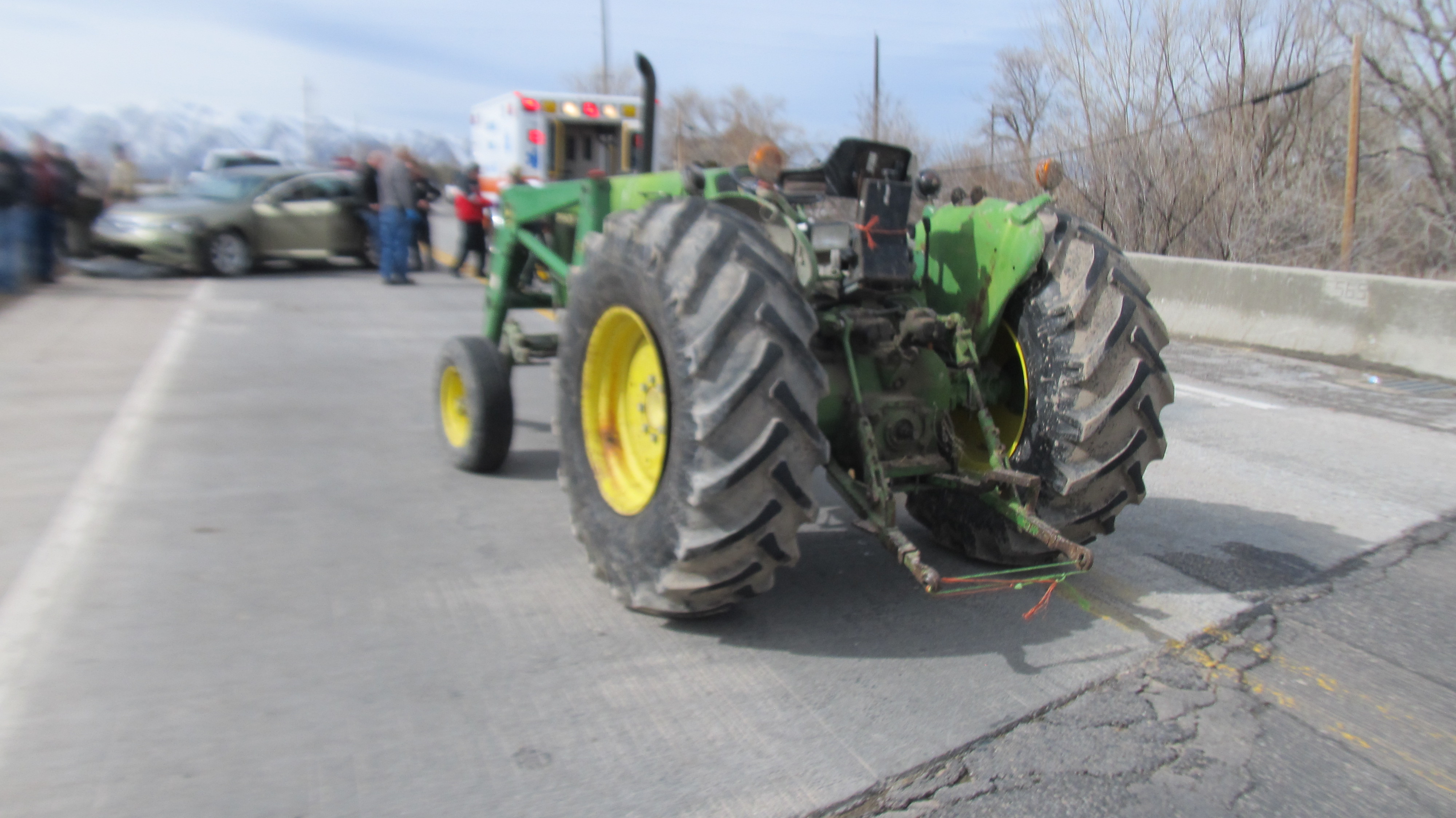 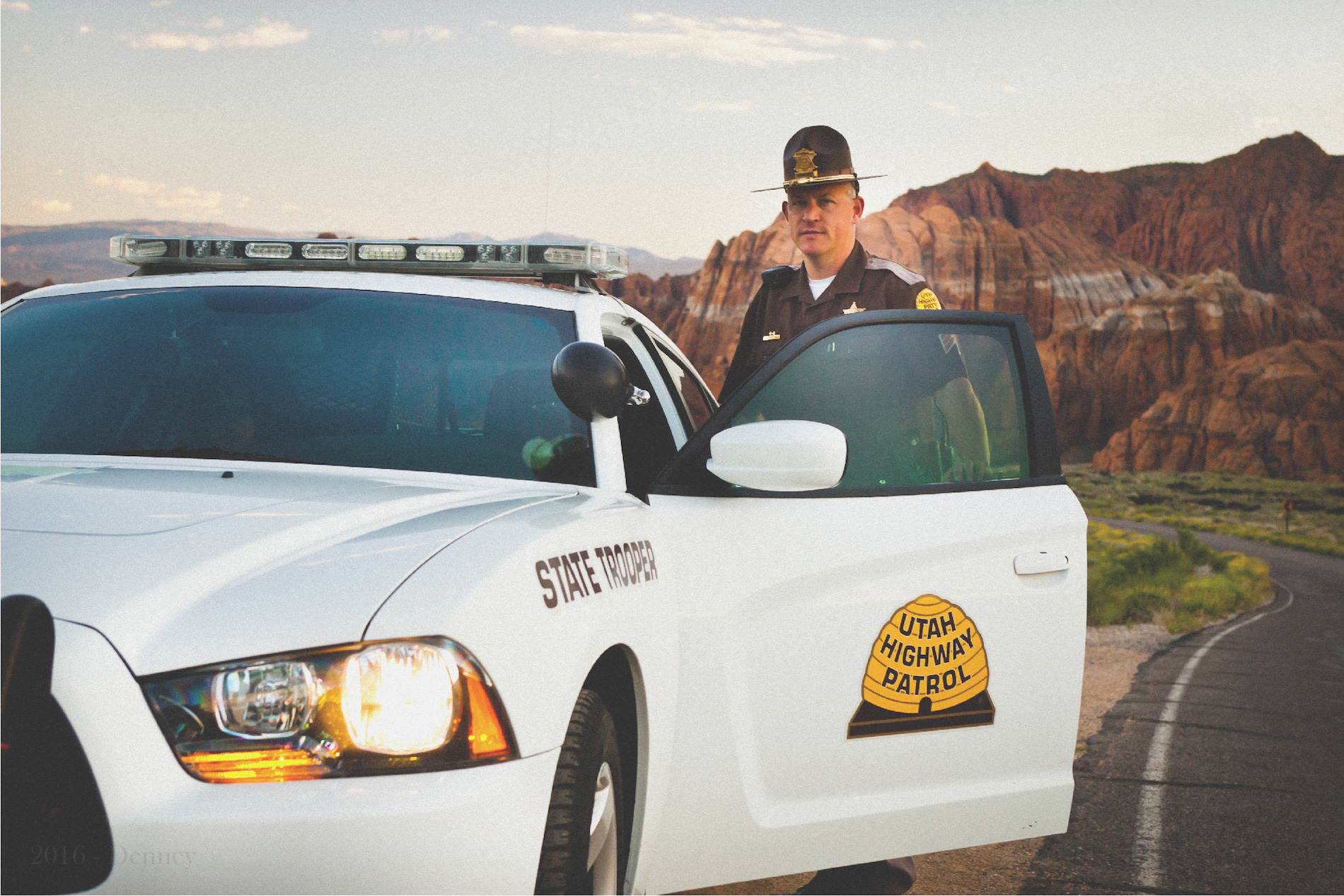 UHP is conducting increased speed enforcement on I-15 in Lehi

For Immediate Release Speeding through the I-15 Tech Corridor construction becoming a concern UHP is conducting increased speed enforcement on I-15 in Lehi. WHAT: UDOT crews working alongside traffic in the I-15 technology corridor are concerned with an observed increase in speed through the corridor. The construction zone speed limit through the area is 60 […] 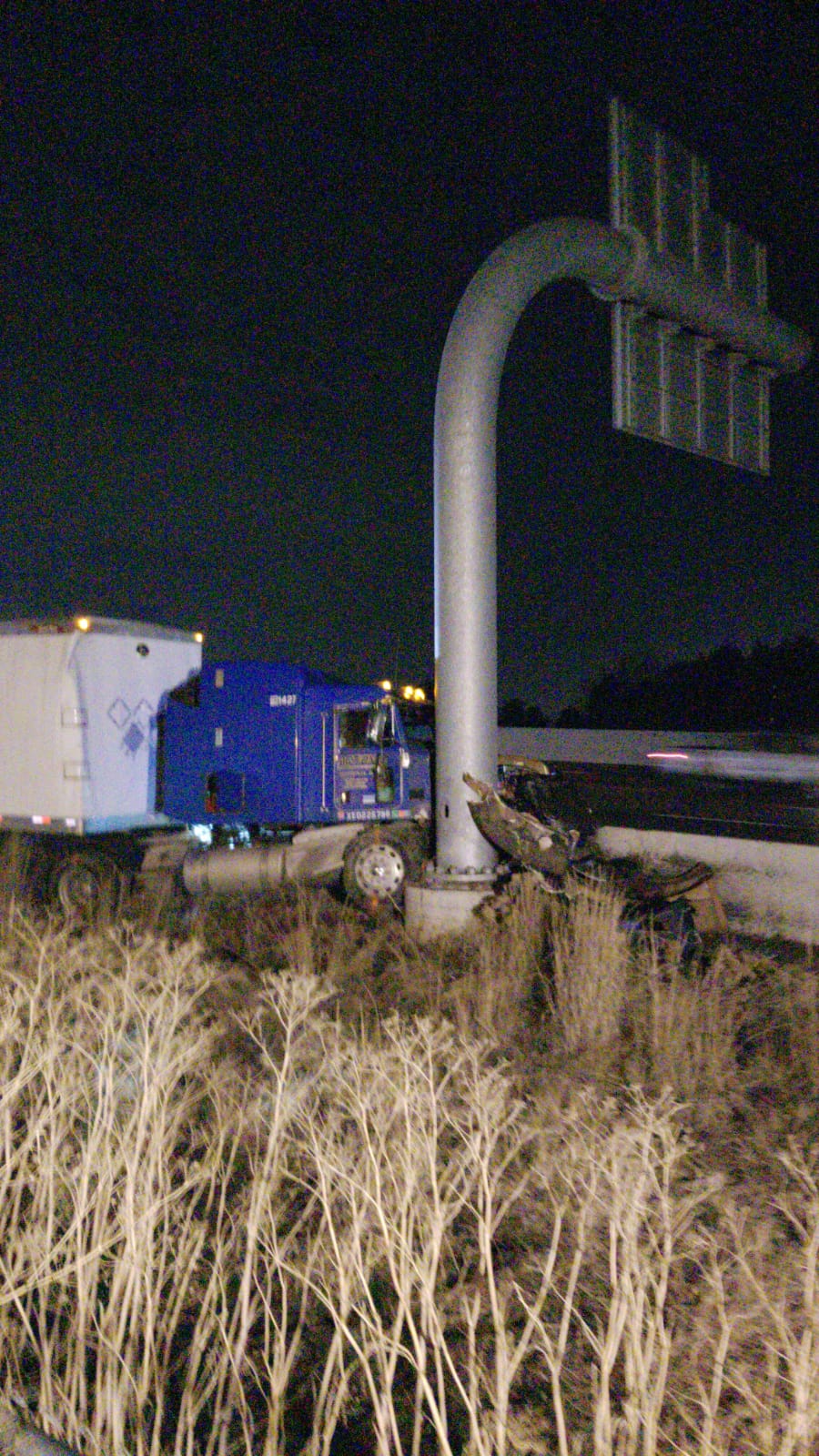 Shortly after 8 pm on December 17th, a Semi Tractor Trailer was traveling northbound on I-15 near 500 South in West Bountiful, where it traveled off of the freeway to the right, crossed through the gore area of the on-ramp and into the dirt area between the freeway’s fence and a movie theatre parking lot. […] 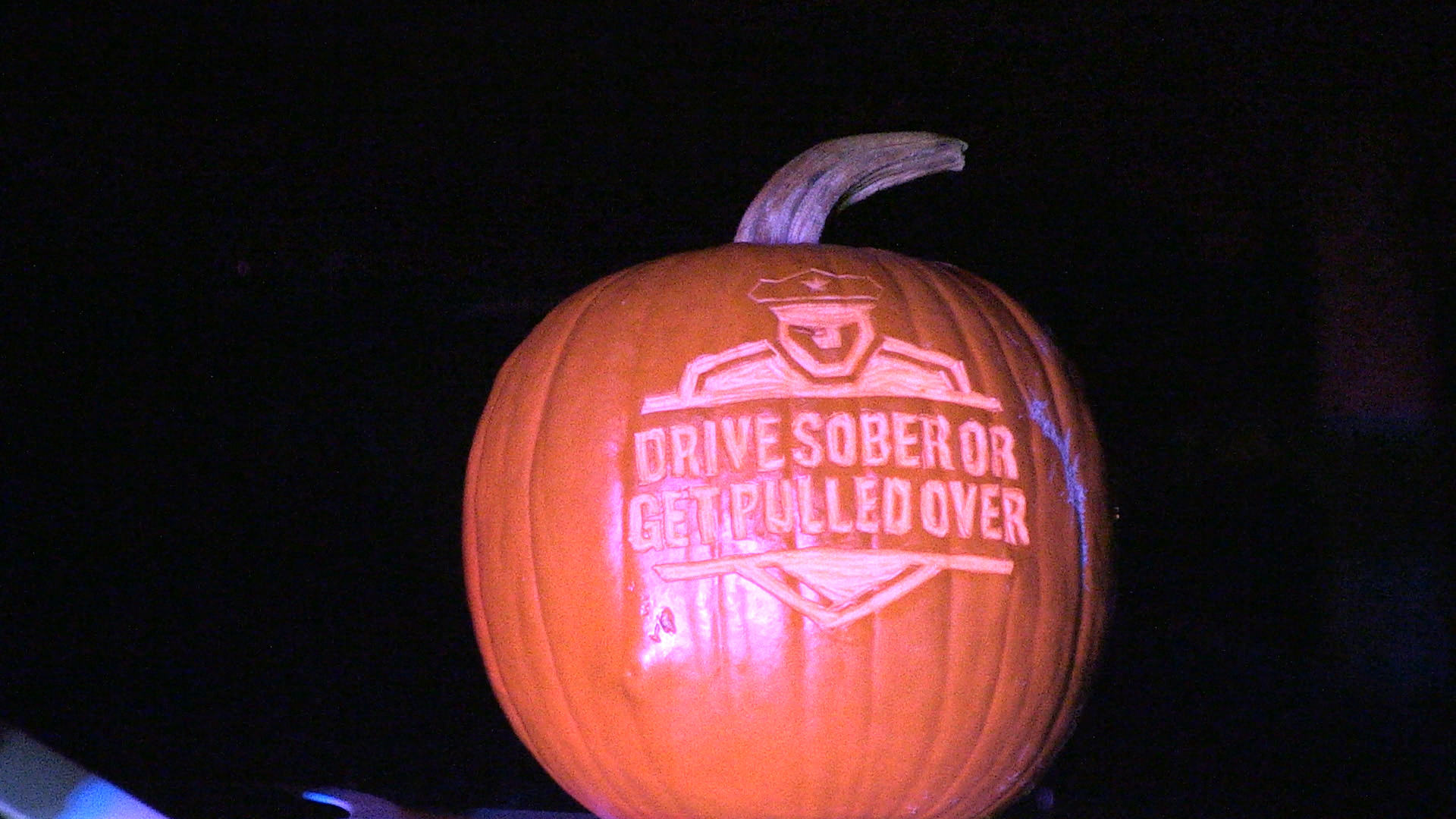 With Halloween right around the corner and the World Series in full swing, some things you might see this weekend are witches, ghosts, ninjas, scary clowns, and Dodgers and Red Sox fans. One thing you will definitely see this weekend is extra police officers working DUI patrols. To help make sure everyone gets home safely, […] 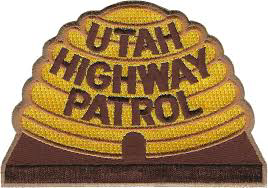 On October 20th 2018, at about 12:40 AM, a black Ford Explorer was westbound on SR-40 near milepost 32.  A silver Audi was eastbound in the same area.  The Explorer left the road to the right, over-corrected to the left and went into oncoming lanes. It impacted nearly head on with the Audi.  The male […] 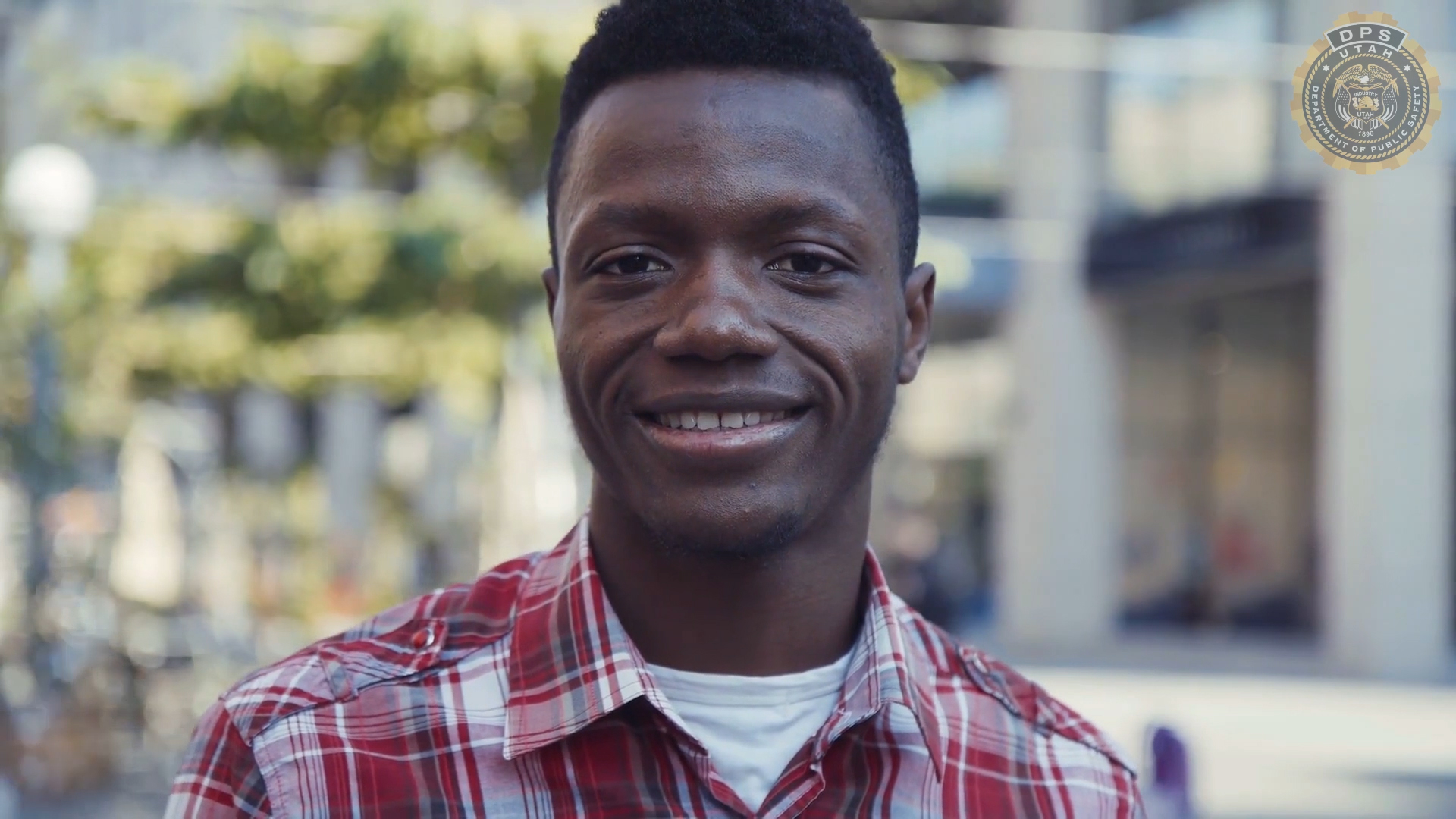 DPS Teams with Department of Workforce Services for Refugee Outreach

The Utah Department of Public Safety is proud to play a role in helping refugees integrate into our community. We recently partnered with the Utah Department of Workforce Services and leaders from the refugee community in an effort to build a two way understanding between law enforcement and those who are new to our country.

Welcome to Utah.gov WordPress Sites. This is your first post. Edit or delete it, then start blogging! 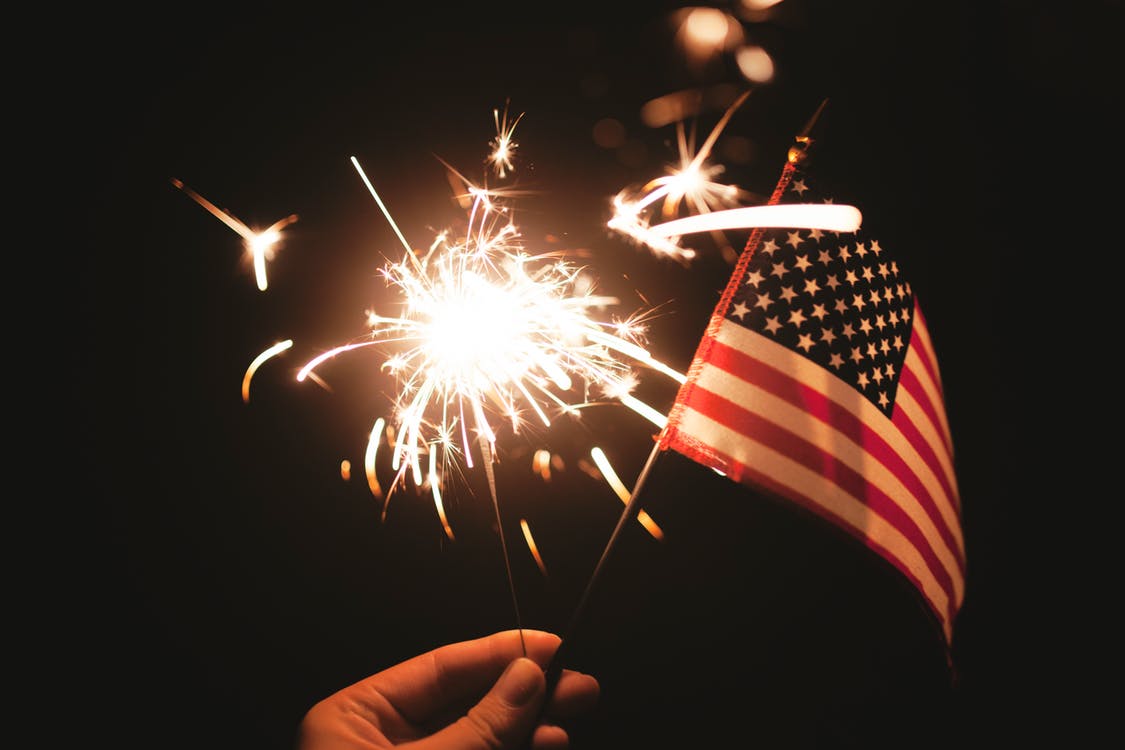 Simple Ways to Stay Safe and Prevent Fires While Celebrating

As we quickly approach our fireworks season, the Utah Department of Public Safety’s Fire Marshal Office would like to remind the citizens of Utah how to responsibly discharge and enjoy their fireworks and novelties this holiday season. “I would remind everyone as they celebrate the independence of our country and the coming of the Pioneers […]